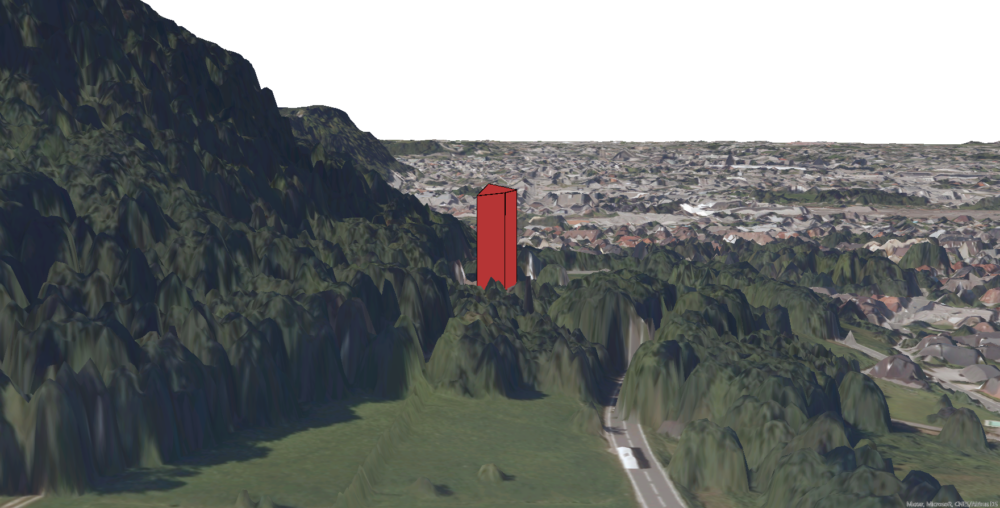 In this project, an imaginary high-rise hotel building proposal is analysed regarding it’s visual impact on the city of Salzburg. The scenario is the following: a foregin investor has bought a small family hotel along the B158 (Grazer Bundesstraße, Österreichische Romantikstraße), halfway up the road from Salzburg to Guggenthal. The investor promises to bexpand the building by 50 meters, creating a tower-like structure with a roof-top restaurant. The investor claims that Salzburg would gain yet another tourist attraction with a wonderful panorama.

Since the proposed building is just short of the Koppl district boundary, the city administration of Salzburg investgates the proposed building.The main concern is that the tower might be an eye-sore, being visible from all over the city and especially from the old town. City officials are concerned that the tower might be visible from many areas in the Old Town, especially from the Mönchsberg and the Fortress, ruining the view of the untouched mountains around Salzburg. The visual impact of the building towards the East is not of interest for the city of salzburg, since it’s jurisdiction ends there. Since an investment of this magnitude might lead to the creation of jobs and increase tax revenues as well as improve the international reputation of the city, the city is willing to compromise as long as the “antique” feel of the old town is not impacted, but a futuristic structure visible from other parts of the city seems like an acceptable idea.

The basis of the analysis is a Digital Surface Model of the state of Salzburg with a resolution of 1 meter. The DSM instead of the DEM is used since the DSM obviously includes the buildings, which obstruct the view of the mountains and possibly the tower, especially within the city. Aerial Imagery from ESRI’s living atlas is placed on top of the DSM to improve the visualisation.
Then, a 3D feature is created on top of the already existing building with a height of 50m, simulating the proposed tower.

Looking at the areas of visibility in Images 3, 4 and 5 shows the extent of the visual impact. Clearly, within the city of Salzburg, the tower is mostly only visible from rooftops. Even from the agricultural fields in the North and the West of the City, the tower is visible from only certain spots.
More importantly, the tower is not visible from the Old Town since the Kapuzinerberg blocks the view. To gain more specific insights, certain points of touristic interest are chosen and it is checked, if the tower would be visibe from there.

Since the conditions outlined in the introduction to this analysis are met, the city is leaning towards allowing the construction to go ahead, at least from the visibility perspective. Also, as visible in image 8, the building is not higher than the sourrounding ridgelines from the perspective of the Mönchsberg, so the visual impact is very low.

As far as the city administration is concerned, with this conclusion the viewshed analysis is finished. In order to provide the investor with additional information, a simulation of the view from on top of the tower was created.

While creating the viewshed, there was an issue with the point from which it was created. The observer point was placed on top of the building polygon, at a height of 50 meters. But when calculating the viewshed, it was always obvious that the viewshed function in ArcGIS Pro used the point on the surface level of the DSM, not in the height of 50 meters. As a workaround, the DSM was adapted to incorporate the building.
Then, multiple points on the edges of the tower were defined to server as observer points for the viewshed analysis. Since the points might not have been placed perfectly on the edges, some of the areas very close to the tower are marked as not visible, even though they should be visible. As soon as the distance is over a fed dozen meters, the effect is gone. 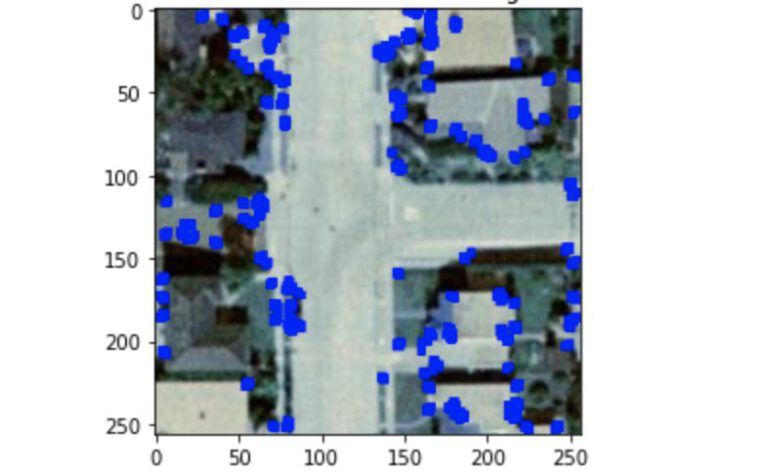